Holochain provides a new approach to DLT. Conventional blockchains of any generation store the ledger on decentralised computers but the data itself is “central” as it is stored completely on every full node. The more nodes, the higher the replication cost and the slower the system. Hacks like lightning or sharding increase the tps capacity, but all existing blockchains reach a limit at a certain point. None will reach Visa-like tps (>25k) any time soon.

Holochain takes a different route. It keeps blockchain traits like immutability, hashing and decentralisation, but it puts these in the technical framework of a distributed hash (DHT) table as used by the widely popular and functional BitTorrent p2p network: 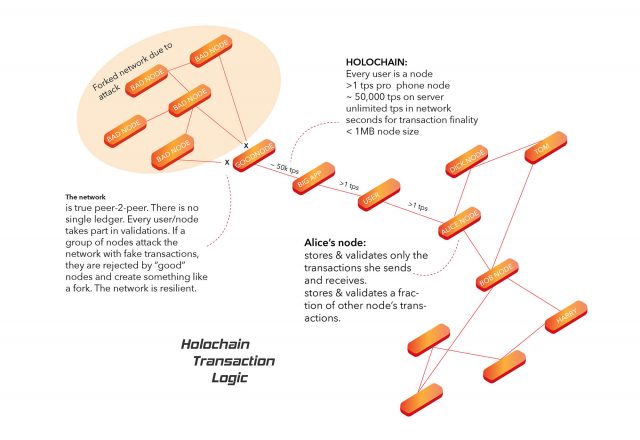 Holochain in their own words:

“Holochain provides a data structure that can be used to build decentralized apps. You have your own chain, which you can add data to, including financial transactions. The chains can merge, split, and interact in complex ways. The data is stored in a decentralized way (like Bittorrent). The data has a hash, which is a mathematical fingerprint that corresponds to the data. If someone tampers with the data, the mismatch between the data and the hash will be noticed, and the data rejected as invalid. Digital signatures guarantee the authorship of the data. It’s Bittorrent plus git plus digital signatures.”[7]

How Holochain can achieve near zero-cost

The Holochain technology is lightweight with every user acting as node, miner and staker at the same time. It can easily run on a mobile phone. That works because the node only stores its own transactions and a copy of some other users’ transactions as in the BitTorrent system. There are no network maintainers that need to be incentivised just to provide upkeep. The incentive for users is to use the system.

With this scheme each additional node adds capacity, rather than reducing it as for first and second generation blockchains. This enables transactional capacity to expand to any required value, even up to billions of transactions per second to cover all currently envisaged world needs for all digital apps.

But there is no free lunch. The network still needs upkeep in the form of bandwidth and file storage. But that cost is accrued at the point of each user, the node. Since a node doesn’t have to maintain the complete ledger as blockchain nodes do, the cost of maintenance is a mere fraction of that of blockchains.

This system is even more elegant on closer inspection as nearly all phones and desktop computers have idle capacity. Users with flat-rate bandwidth who charge their mobile phone daily will hardly ever have to pay anything extra for maintaining their node and thus the network.

State of Holochain and Pacio’s Extension of It

The Holochain project is years old with an active community. Initial development used the Go language, but in 2018 Holochain decided to switch to Rust as the main development language. That transition is well advanced and should be complete by 2019 Q2. Pacio is working only with the Rust version of Holochain.

Holochain’s design is ideal for applications that revolve around file hosting, social media, and simple transfers. While digital currencies can be built on Holochain, it is not its most core use case. Nor is Holochain optimal for business or other apps with complex transactions plus high throughput and database needs.

Pacio is attempting to stay compatible with Holochain ie without forking Holochain, and as Pacio work matures will feed back to Holochain.

Pacio - If it doesn’t work, invent it